Four generations of the Blackett family from Leeds, Yorkshire, England 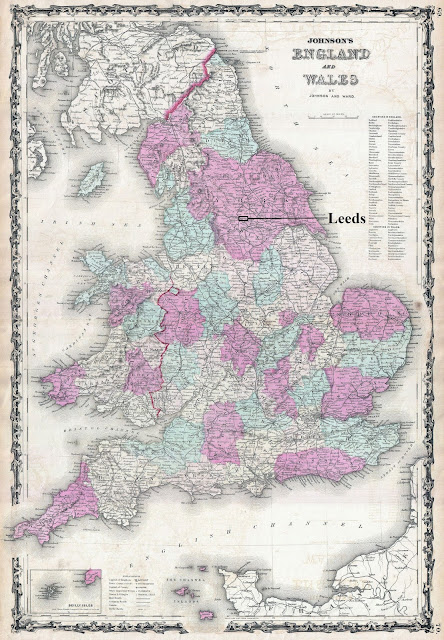 My 5th great-grandfather was John Blackett. He was born in Leeds, Yorkshire, England, in 1767 and evidence suggests he was the son of William Blackett and Jane Lodge. He married Elizabeth Whitely in nearby St. Peter’s Cathedral in Bradford, Yorkshire, in 1786. He and Elizabeth were required to marry in the Church of England, to make their marriage legal, but they were non-conformist Methodists. They were members of the Ebenezer Street, New Connexion Methodist church in Leeds. New Connexion Methodists felt Wesleyan Methodists gave too much authority to ministers over laity and split off in 1797.


John was a cloth presser and worked in the woolen textile industry which was thriving in the Leeds area. This was before the industrial revolution and the age of factories. Instead, he worked in a domestic household, often a cottage, and was probably employed by a local clothier merchant. For years, the family lived in the rural area of Quarry Hill in what was then the outskirts of Leeds. Today this area is an inner-city neighborhood.

In Leeds between 1787 and 1801, John and Elizabeth (Whitely) Blackett had eight children. However, two died in infancy.  About 1805, John and Elizabeth, along with their six children, immigrated to Albany, Albany County, New York. John died in Albany about 1812 and Elizabeth later married William Galloway. She did not have any children from this second marriage and died in 1828.

John and Elizabeth’s youngest sons, John and William, moved to New York City about 1830 and ran a successful hardware and locksmith business for over 30 years. They also employed other family members who moved from Albany to New York City as well. William eventually sold his business share to his brother and moved his family to Clermont, Fayette County, Iowa, where he died in 1879. John died in 1868 and his contested will has provided many pages of interesting details on the New York area Blacketts. 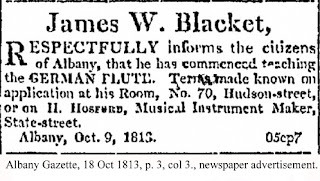 My 4th great-grandfather was James Whitely Blackett, son of John and Elizabeth (Whitely) Blackett. He was born in Leeds in 1787 and remained in Albany after his family immigrated there. He married Mary Colling in Albany in 1810. James began his career as a German flute teacher. Maybe he could not make a living teaching the flute as he later ran a cloth dying business on the corner of Hudson and Green street for many years. James and Mary (Colling) Blackett had five children between 1811 and 1818 but it appeared only two survived to adulthood. James and Mary died before 1868 but I am still searching for information on the exact dates and places of their deaths.

William Colling Blackett, son of James and Mary (Colling) Blackett, was my 3rd great-grandfather. He was born in Albany in 1812. He moved to New York City about 1835, possibly to work for his uncle in the hardware store. He enlisted in the U.S. Navy by 1845 and served as an Ordinary Seaman. In 1849 he was discharged and later worked as a clerk in the Brooklyn Navy yard. In New York City about 1836 William married Emma Withington. Emma, the daughter of Thomas and Susannah (Bratt) Withington, was born in Birmingham, Warwickshire, England, in 1819. She immigrated to New York City with her parents and siblings in 1827. 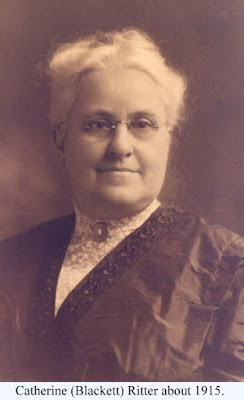 William Colling and Emma (Withington) Blackett had four children in the New York City area between 1837 and 1849. Their youngest child, Catherine Louise Blackett, is my 2nd great-grandmother. Sadly, soon after Catherine’s birth, Emma (Withington) Blackett died from consumption [tuberculosis] in 1851. William then moved himself and his children into his brother’s household in a new suburb of New York City. Tremont, a village in West Farms, Westchester County, was a recently developed area where many moved to escape the congestion of New York City. William lived in Tremont with his brother, John Blackett, until John died in 1863. William later lived with his daughter and died in New York City in 1872. West Farms was annexed by New York City in 1874 and is now part of the Bronx. William was buried, along with his wife Emma, in Cypress Hills Cemetery in Brooklyn. He was a member of the Independent Order of Odd Fellows and was buried in the I.O.O.F. section of the cemetery.

While living in Tremont, Catherine Louise Blackett met William Crook Ritter. William’s parents, Washington and Eliza (Johnson) Ritter had also recently moved out of New York City and built a house in Tremont about 1856. William Ritter and Catherine Blackett were married in 1867. They had four children in New York, Massachusetts and Ohio between 1867 and 1889 and eventually settled and remained in Cleveland, Cuyahoga County, Ohio. In 1876 they had a fateful month in Boston which I wrote about in "It Started with a Cough: A Month of Mourning for the Ritter and Blackett Families Living in Boston Highlands, Massachusetts."