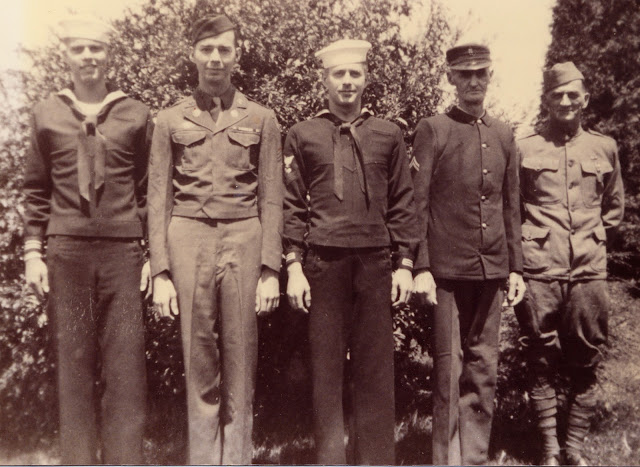 This Memorial Day I was reminded of my father Grady Guye's military service. So I dug out this old photo and accompanying newspaper article.

This unusual photograph belongs to Elkins resident Grady Guye. It was taken during the summer of 1952 and shows five members of his family that severed in four different wars.
“My brother Rodney was home on leave that summer,” Guye said. “We were all sitting around talking when someone suggested we dig out our uniforms, put them on and have a picture taken while we were all home. The uniforms needed to be pressed because they were all in boxes at the time, but we put them on anyway.
“I’m glad we did because this is one of my most prized pictures. Rodney and I are the only ones left now. Dad, my uncle and my brothers were all proud to have served our country, as millions of others have over the years.
“My prayers are with our servicemen now serving in the Middle East and with their families, as well,” Guye said.
Rodney Guye, youngest brother in the family, served in the U.S. Navy during the Korean War from October 1950 to August 1954. He was a fire controlman, third class, on the destroyer escort, the USS Blackwood.
Grady Guye, the oldest of the brothers, served with the U.S. Army Air Corps during World War II from December 1942 until February 1946. At his time of discharge, he was a post sgt./maj.
Louis Guye Jr. served in the U.S. Navy for four years during World War II, He served in the Armed Guard as a signalman and gunner on the USS Lewis L. Dysche, one of several ships under kamikaze attack for several days as they delivered troops to the Philippines.
James K. Ferguson, an uncle, served in the Philippines during the Spanish-American War. He was a corporal in Troup I of the 11th Calvary. Troop I later participated in the funeral services for President William McKinley at the U.S. Capitol on Sept. 17, 1901 as part of the honor guard. Troop I and Troop L were the only mounted troops that participated in the marching column.
Louis Guye served in France with the U.S. Army 113th Engineers, Company E, during World War I (1917-1918).

Posted by Pamela Guye Holland at 3:52 PM No comments: