The Flatz Family of Wolfurt, Vorarlberg, Austria, and their journey to Ohio

One of my maternal 2nd great-grandparents was Mary Flatz who was only 4 years old when her family immigrated to Ohio. Mary, the daughter of Franz Xaver Flatz and Maria Anna Geminder, was born at no. 3 Weidach in the village of Wolfurt at 8 o’clock in the evening on 17 June 1848. She was baptized with the name Anna Maria the next day in the local Catholic church. Her father was a village baker and she had two older brothers and one older sister.

Wolfurt, in the Austrian state of Vorarlberg, is located in the far western corner of Austria near the current borders of Switzerland, Liechtenstein and Germany.

This area, near Lake Constance, is mountainous and hemmed in by the Silvretta Alps which are topped by glaciers. In the early 1800s there was only subsistence farming and little industry or other work available.

The Flatz family were like others in the area who had to produce all they needed to live on. They may have had milk from a single cow, meat from pigs and eggs from chickens. Wheat and bread were sometimes hard to come by and they would have grown vegetables including beets, corn and potatoes. Even the children worked by weaving flax or spinning wool.

Their hard life and the lure of better opportunities in America enticed the family to emigrate. In late winter of 1853 the family began their two-month journey from Austria to Ohio. They left on 18 February 1853 and travelled for five days through Switzerland and part of Germany to Antwerp, Belgium.

Besides Mary’s family, including a new sister only 10 months old, the travelling party also included her uncle Gebhard Flatz and aunt Johanna Flatz, a cousin named John Gephart Sneider, and three other Wolfurt families. It was John Gephart Sneider’s autobiography that provided many of the details for this story.

After reaching Antwerp they purchased tickets on the ship Peter Hattrick and began to buy supplies they were unable to bring with them from Wolfurt. They needed to provide all their own food and bedding on board the ship as well as items they might need in their new life. The ship’s manifest shows the Flatz family brought on board 8 chests, 6 beds and 6 guns. Their Wolfurt travelling companions also brought a 6 chests, 3 beds and 4 guns.

They set sail from Antwerp on 28 February 1853 and were at sea for forty-eight days before finally landing in New York City on 16 April 1853. It is hard to imagine what the eight weeks at sea were like for the 263 passengers. One adult and three very young children died during the voyage. 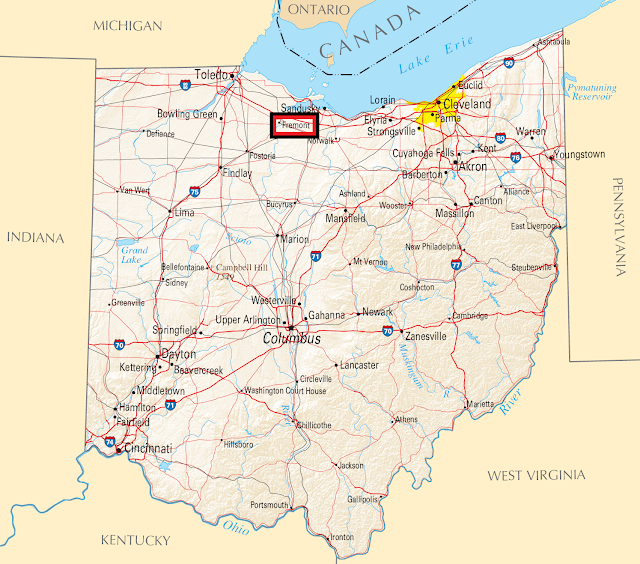 Once the family disembarked in New York City they immediately set off for Fremont, Sandusky County, Ohio, and arrived there on 24 April 1853. It is likely they were following a route that previous Wolfurt natives had taken before them and knew about the opportunities for good farmland in the Fremont area. Franz and Gebhard bought 40-acres of land east of Lindsey and began farming it that summer.

The Flatz family thrived in Ohio and Franz and his wife, now going by Mary Ann, soon had three more children. Mary Ann (Geminder) Flatz died on 14 January 1878 and was buried in a local Catholic cemetery. Franz Flatz later became Lutheran and died on 13 March 1908. Mary Flatz met James Michael Yeagle, who was living in nearby Rice Township, and they married on 1 January 1871. After having 6 children, Mary (Flatz) Yeagle died on 12 February 1921 in Clyde in Sandusky County.

Posted by Pamela Guye Holland at 5:08 PM No comments: