How To Make Someone’s Day

Saturday at the NERGC Conference in Providence, R.I., I got to make someone very happy. At the conference’s Ancestors Road Show, where twenty minute consultations are provided, I volunteered to answer questions. Fortunately one of my appointments sent in her question the night before and I had a chance to do some research on her brick wall.

The questions was “Who were the parents of Anna Phillips born in New York City on 6 August 1849 to Henry and Leah (de Paris) Phillips?” There was nothing known about Anna’s early life. Her birth information and parents’ names were from her death certificate. She was not found in census records until after she married in Hartford, Connecticut, in 1868. And the records she was found in provided conflicting information about her parents’ origins.

Since Anna was born in New York City in 1849 I focused on finding her family in the 1850 census. However, no family was found with Henry and Leah Phillips as parents of a daughter named Anna.  I decided to turn to other sources that might help identify the family.

Manhattan kept a register of deaths for the years 1795-1865 that is available on microfilm from the FHL. (It is also available at NEHGS and probably other archives.) The original register included the deceased person’s name, age, date, place and reason of death as well as the cemetery and undertaker. FamilySearch’s database "New York, New York City MunicipalDeaths, 1795-1949" can be used as an index to this register. The database does contain death information from other collections but you can check the referenced microfilm number to identify the original source. 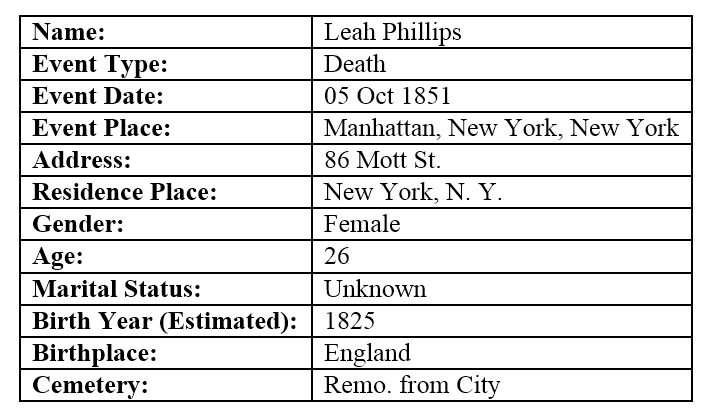 Searching an 1850-51 New York City city directory did not show anyone named Phillips living on Mott Street. And a search for 86 Mott Street turned up only one person named Anna Busteed.[2]

Examining the 1850 census for anyone named Henry Phillips living in New York City produced 12 results. One of those results was for a Henry born in England with a birth year close to Leah’s.[3] 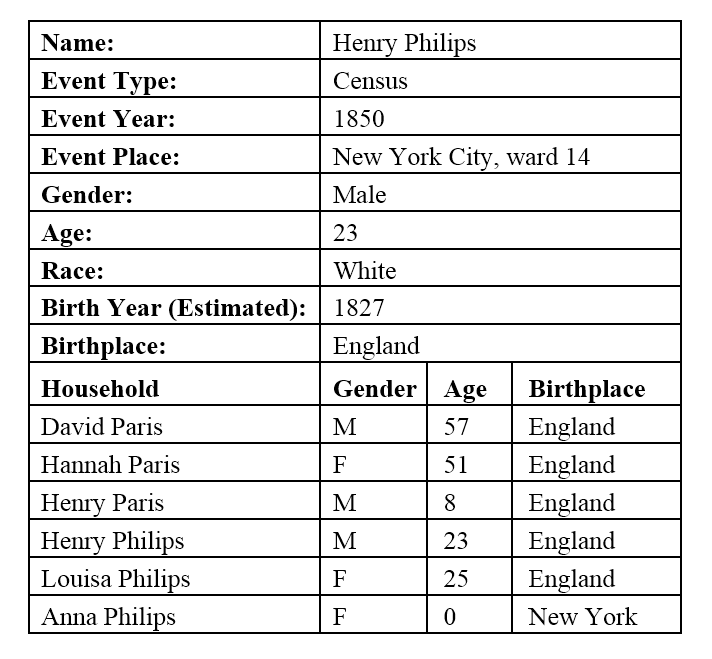 This could be the family! Although Leah is named Louisa the other details seem to fit the family. And Leah/Louisa appears to be living with a couple that could be her parents since her death certificate maiden name was de Paris.

Looking at the census image itself shows the family split between two census pages and living in what seems to be a two-family house. 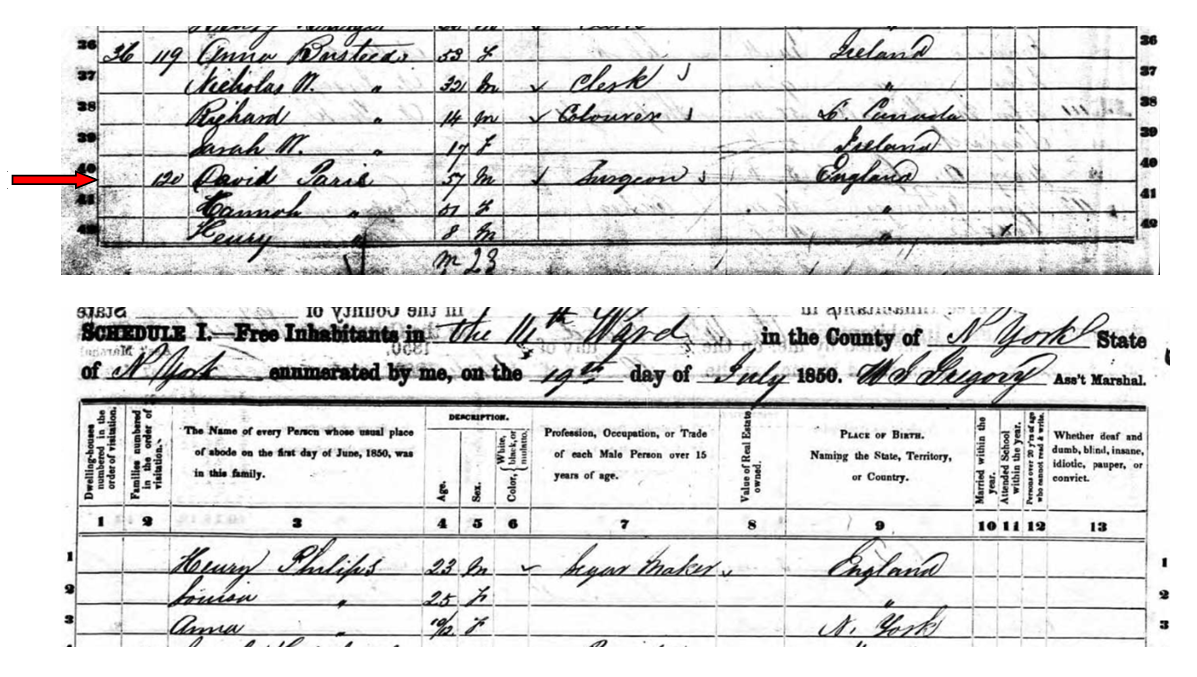 Best of all look who is also at the address. Anna Busteed! This must be 86 Mott Street and therefore this Louisa Phillips is indeed Leah Phillips who will die there in 1851.

Armed with more information about the family it was easy to find Anna Phillips in the 1855 New York State Census living with her presumed grand parents.[4]

Leah/Louisa Phillips is missing as expected since she died in 1851 but where is Henry Phillips? Checking the Manhattan death register again doesn't turn up Henry's death but did find Hannah Paris' death in 1857.[5] 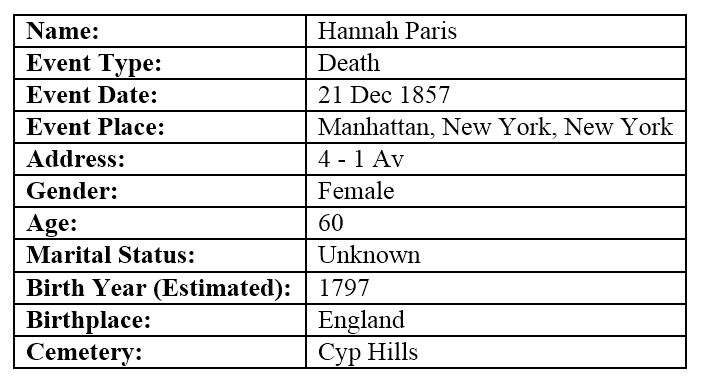 The family was shrinking with Henry's supposed death and the death of Anna's presumed grandmother. There is still the 1860 census to find and maybe this will provide some information on Anna's move to Hartford, Connecticut.

However, before the consultation was over I had one last record to share. The Paris family passenger arrival record in 1845 for David Paris, Mrs. Paris, Louise Paris and Infant Paris.[6]

In the end it was a very happy person at her consultation. She walked in the room hoping to learn a little something about her ancestor's life and walked out with another generation of ancestors including their immigration information.

Posted by Pamela Guye Holland at 2:47 PM No comments: