Worshiping with an Ancestor

Today I got to do something unique. I attended church with the congregation of an ancestor.

Over two hundred years ago my 4th great-grandfather Adam Kreiligh immigrated to America. Eventually he ended up buying land in Upper Mahanoy Township, Northumberland County, Pennsylvania.[1] Because Adam and his family were Lutherans they began attending Himmel Church which was about 5 miles away.[2] The church was just an old log building built along the banks of Scwaben Creek and served both the Evangelical Lutheran and Reformed congregations of German-speaking immigrants in the area.[3] Adam was an active member and participated in a resolution to build a new stone church. On 14 June 1817 he contributed $16 along with other members who gave what they could.[4] The new church was completed in 1818 and stood until 1903.[5] 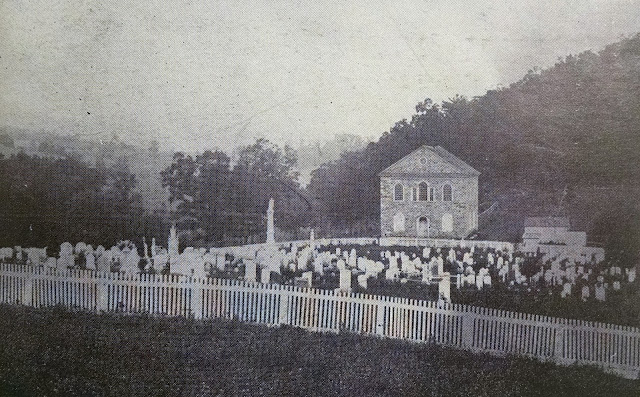 This stone church was “built in the old Pennsylvania style, with a one-story main room and gallery, an old-fashioned pigeon-box pulpit, and a seating capacity of four hundred.”[7] When $800 was left over it was used to purchase a pipe organ which became the only one for miles around.[8] Eighty years later the congregation outgrew the building. It was replaced in 1903 and then had to be rebuilt after a fire in 1959.[9]

When I found myself in the area I decided to attend a service at Himmel Church. It still serves both Lutheran and United Church of Christ (formerly Reformed) congregations. I thought I was visiting on a whim but as I sat in the pews I discovered my ancestor had brought me there for a reason. 198 years, almost to the day, after the historic congregation decided to build a more permanent church the current congregation was contemplating disbanding. With an aging and dwindling congregation, lack of member participation and an ever-increasing deficit the church was in crisis.

During the worship service a special congregational meeting was held to vote on closing. I knew there were many descendants of the founding congregation sitting around me as their families had stayed in the area. But I was the only Kreiligh descendant. Adam and his children moved to Rice Township, Sandusky County, Ohio, in 1834.[10] I think my 4th great-grandfather wanted one of his descendants to be in his church today. It certainly felt fitting that I was there. And it seemed like he was there with me during the emotional but tender service.

I was proud to be in my ancestor's church today. Especially when the congregation voted unanimously to continue and keep the church alive for future generations.